D2L Tool Tip of the Week: Creating Forums and Topics in the Discussion Tool in D2L

This tutorial is designed for faculty who have previous experience using D2L and will cover the steps involved when you wish to create forums and topics in the Discussion tool in D2L. The Discussion tool allows for asynchronous discussions of topics, and sharing of information, between students and groups of students. But first, you need to know the difference between Forums, Topics, and Threads/Replies.

To create a Forum

To create a Topic

To create a Thread to start the discussion

To Reply to a Thread

You cannot create a Topic without putting it into a Forum – every Topic must belong to a Forum!

You and your students CANNOT post to a Forum. You need to have a Topic in order to post threads and replies.

One Forum can contain multiple Topics. You don’t need to have a separate Forum for each discussion, only separate Topics or Threads.

If you have Locking Options set up for a Forum or Topic, and you copy your discussion Forums and Topics from one course to another, remember to revise these settings for the next course, otherwise the original settings will control whether students can post to that Forum or Topic. So, for example, if you locked your Week 1 Discussion Topic on October 31, 2016, that date will copy along with all the other Discussion settings!

How do I keep my Final Calculated Grades updated as I add grades?

Here’s a topic from the The Amazing D2L Gradebook workshop:  Keeping final grades updated so you don’t have to calculate them all at the end of the term.

Are you wondering why you don’t see the Final Calculated Grade appearing as you add grades for students? Does it look like this? 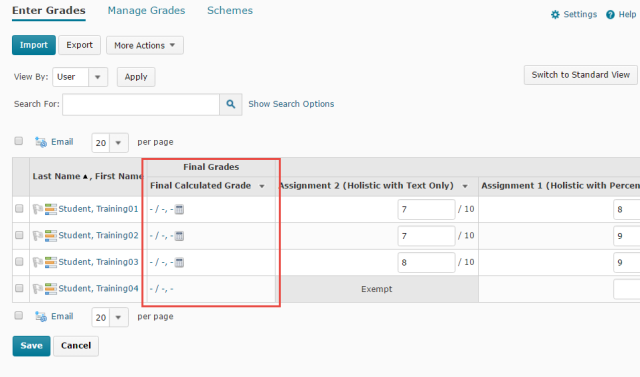 In order to see the Final Calculated Grade changing in the Enter Grades area as you add grades for students, you need to adjust a Setting. So, here’s how you do that!

Want to know more? Contact desupport@camosun.ca to book an appointment with an instructional designer!

If you remember from December, D2L added a feature where you could exempt a grade item for individual students (from the grading area for a Grade Item).  You can read about it at D2L Monthly Upgrades – What’s new in December!

This month, we are seeing an improvement to this feature.  Now you can go straight to a student’s gradebook, and exempt that one student from multiple grade items.  If you’re looking for options around dropping different grade items for different students that aren’t covered by dropping the lowest grades in an equally weighted category, this may be an option for you!

Here’s how to do it:

Those exempted grade items will then be automatically excluded from the final grade calculation for that student.

(Our final Slam Story in this series!)

In October 2016, the eLearning unit in CETL hosted Camosun’s first “UDL Slam.” Faculty and staff were invited to share stories about practical applications of UDL (Universal Design for Learning) Principles they have implemented in their courses or programs. The “Slam” format required that these stories include the following details and be told in 5 minutes or less: 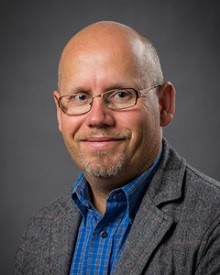 In this fourth and final in a special series of posts, we give you this effective and adaptable example of UDL in practice, which was shared at UDL Slam 2016 by Dan Reeve from Political Science.

At the bottom of this post, we have included our own mini-analysis of which UDL Principles & Guidelines underpin Dan’s solution to a learning barrier.

Barrier: Getting quiet people to contribute ideas in class

In his 1st and 2nd-year Political Science classes, Dan actively encourages discussion and feedback from students. However, he’s well aware that not all of his students are comfortable putting up their hands and speaking out in front of their peers or telling him if they are struggling with course concepts. Knowing that this discomfort can equate to missed learning opportunities for everyone and wanting to hear from more voices in his classes, Dan was looking for a way to coax ideas and feedback from the quieter or more introverted students in a way that would not also generate stress or anxiety.

After a conference workshop introduced him to the web-based tool, Poll Everywhere, Dan looked into whether he could incorporate it as a low-risk method of supporting communication in his classes.

Poll Everywhere allows an instructor to pose questions to students during a class and while the collective responses are shared for the full class to see, students’ responses are anonymous. The collected responses can then serve as a springboard for deeper class discussions on the topic, or give the instructor a quick read on the students’ grasp of concepts at that point in the course. Students can use their mobile phones or web browsers to respond to a range of question types (open-ended, multiple-choice, short text, etc.), and an instructor has options about how and when to reveal a class’s responses to the full group.

One of the reasons the Poll Everywhere tool appealed to Dan was because he could incorporate contextual questions for students into his in-class PowerPoint presentations and then display their collected responses within the same PowerPoint slides and context. Additionally, since most students in his classes already had cellphones, no additional technologies were required. If there were any students without a cellphone or laptop in the class, Dan simply paired them up with a classmate who did have the hardware. That said, students were not required to participate and were not assessed on their responses; if students still were not comfortable or willing to respond to questions, they could opt out.

And finally, as far as privacy concerns go, students did not need to provide any personally-identifying information to participate in the Poll Everywhere activities: they did not need to create an account on Poll Everywhere to respond to Dan’s questions, and they could also access the Internet through the college’s EDUROAM service and not their own data plans.

[For more information about Poll Everywhere and useful applications of the tool, see http://www.polleverywhere.com/blog/great-ways-to-use-poll-everywhere-in-the-classroom/]

In his pilot use of Poll Everywhere, Dan found that he could pose open-ended questions to his class and generate more responses than he would typically get through the traditional “hands-up, vocal responses in front of the class” approach. In other words and as per his original goal, he did end up hearing more from the quieter introverts in his classes.

A tertiary benefit to the Poll Everywhere-based questions was that Dan was able to save some in-class time. Rather than posing a question and going around the room one student at a time to collect responses, all of the responses to a question would appear on the screen at the same time and could be reviewed and discussed further from there. This not only made “pair-and-share” activities more efficient, but also permitted more opportunities to pursue a wider array of questions.

In addition to being mindful about students having access to a cellphone or laptop in his classroom, Dan found that students’ enthusiasm for responding to Poll Everywhere questions waned if he posed too many questions per class; he could easily end up losing the participation he had just gained. His recommendation is to avoid overloading a class with questions; use Poll Everywhere thoughtfully and not too much.

The following screenshots illustrate examples of some of Dan’s Poll Everywhere-based, in-class activities and how the collected responses are displayed to everyone in a class:

How do I make sure files I add to a Module are saved in the right place in Manage Files?

Here’s a topic from the Getting the Most out of the Content Tool in D2L workshop:  Did you know that you can set a Module in Content so that any file you upload to it automatically is saved in the same folder in the Manage Files area?

Yes.  You can set a Module so that all files uploaded to that Module are automatically saved in a specific folder in Manage Files.  Why is this important? Well, managing your files in D2L is important to ensuring that you can find files that you upload and link in Content.  So, in this post we will look at the steps involved when you wish to set a Default Path to a specific Manage Files folder for a Module in the Content tool.

Remember to set up your Default Paths at the same time as you create your Modules. This will save you from having to reorganize your files in Manage Files later.

Want to know more? Contact desupport@camosun.ca to book an appointment with an instructional designer!

Unless otherwise indicated, all content on this site is licensed under a Creative Commons Attribution 4.0 International License.

Theme by Anders Noren — Up ↑