With limited server space and the need to better manage our carbon footprint, we cannot accumulate volumes of media. As end of term approaches, it is time to start pruning your Collaborate and Kaltura media collections.

Camosun is working on a more formal data retention plan to help manage the growing volume of media. In the meantime, it is good practice to get in the habit of cleaning out your media at end of term or making it part of your annual SD plans.  Questions?  Email elearning@camosun.ca.

There have been some changes with some of the tools we support here in eLearning at Camosun we wanted to let you know about here:

The new D2L/Colleague Integration will result in changes and improvements to the faculty and student experience in D2L. Read our CETL notice to learn more.

Blackboard Collaborate Ultra has been working on improvements to its video gallery to enable Moderators and Participants to view up to 25 simultaneous video feeds. Moderators will see up to 25 simultaneous video feeds beginning April 8, and Participants will get access to this functionality later in the month. Note that we still recommend not having all videos active all the time during a session to conserve bandwidth especially for students with poor connections.

Read our CETL notice to learn more about what’s coming to Collaborate in the future.

If you are an instructor in a D2L course site containing multiple instructors where each instructor is responsible for a specific group of students in the course, or if you are working in a D2L site with merged sections where you want to create separate assignments for each group/section’s students, this post is for you!

In this tutorial post, we will cover the steps involved with setting up Release Conditions in an assignment when you want an Individual Assignment Type assignment folder available only for a specific group of students (you will need to create Groups in your D2L course first to use this feature – see the various Groups tutorials for more information.)  For more general information about Conditional Release see the Conditional Release – Setting up Release Conditions tutorial under Course Admin.

Once you create a Group Assignment folder you can NOT change it back to Individual. You have to delete it and start over.

Starting to use Rubrics in D2L?  This tutorial is for faculty who have previous experience using the Assignments tool in D2L, and will walk through attaching a Rubric, grading using a Rubric, and showing you what students see as well. NOTE: Make sure you have created your rubric(s) in the Rubrics tool first!

Steps for Attaching Rubrics to Assignments

What Students See when Viewing Rubrics in Assignments before Grading

What Students See when Viewing Rubrics in Assignments after Grading

Only Points and Percentages rubrics will adjust the score in an Assignment. Text only rubrics will only generate text-based feedback, and you will have to add a score manually in the Submissions area if the Assignment has a grade.

There is a new setting available in Quizzes, which allows you to set an additional attempt on a quiz to only show students the questions they answered incorrectly in the previous attempt. New Attempt feature in Quizzes (to only do incorrect answers). And cautions (about grade export and conditions).

When this setting is selected, learners who attempt a quiz more than once can only answer questions that were incorrect on the previous attempt.  You will find this setting under the Assessment tab when editing a quiz, and here is what this setting looks like: 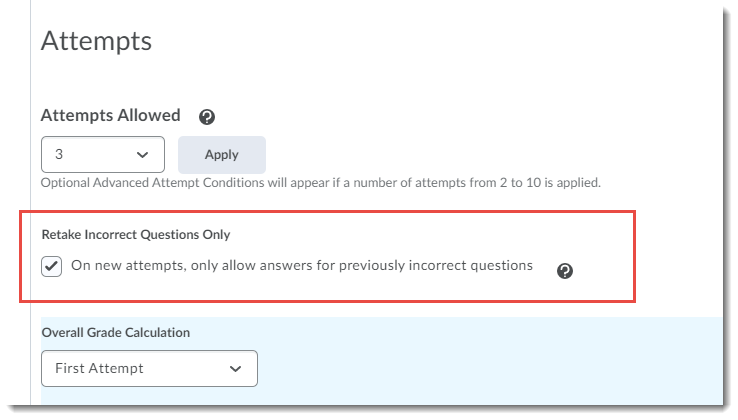 Some things to note:

First, if you are sending the grade from the quiz to the Grades tool, choosing First Attempt will ensure that the grade does not change when a student completed a second (or third, etc.) attempt. If you choose Highest Attempt, the system will add the grades from the first and second attempt (etc.) together, for example if the student received 2/5 on the first attempt, and answered 2 more questions correctly on the second attempt, they will receive 4/5 in the gradebook. If you choose Average of all Attempts, each subsequent attempt will mean a new average will be generated, for example if the student received 2/5 on the first attempt, then answered 1 more question correct on the second attempt, their grade in the Grades tool will change from 2/5 to 2.5/5.

Second, if you conditionally release other activities to a Quiz grade, that condition will be dependent on how you have set the grading for the attempts. So, if a student gets 2/5 on their first attempt, and the First Attempt is set as the overall grade for that quiz (whether or not it is sent to the Grades), and if a release condition is set for completion of that quiz with a mark greater than 60%, this student will never be able meet that condition, even if they eventually get a 4/5 on a subsequent attempt.

Third, if you include Written Response questions, they will be marked as 0 and included in future attempts until they are graded manually.

Finally, while this may seem like a good setting for self-assessment quizzes, sometimes it’s better to let students do all the questions multiple times as they may have gotten an answer correct accidently the first time, and this setting will not present that question again.

Questions?  Contact eLearning@camosun.ca to book an appointment with an instructional designer

I wanted to take a moment to update you on where we are at as we begin to create new tutorials for the Rubrics tool in D2L.

Rubrics in D2L can be attached to Assignments, Discussions, or Grades.  When you integrate a Rubric in D2L, the grade you assign on the Rubric automatically becomes the grade for the assessment it is attached to.

There are 2 kinds of Rubrics you can set up in D2L:  Holistic and Analytic.

Note that once a Rubric has been attached to something (assignment, discussion, grade item) it can NOT be deleted!

So far, we have finished 3 rubric tutorials (which can also be found on our Tutorials site).  Check them out here as well!

Have questions about rubrics, want to know how to add your own rubrics to D2L, or just need some help?  Contact eLearning@camosun.ca to arrange for a consult with an instructional designer.

Camosun College is updating its integration with the Colleague student information system. Faculty and Students will notice changes to some of the D2L communications tools as a result of this update.  And there are also some exciting (and long awaited) changes coming up!!

As of January 2021, the D2L Email tool will be limited to student-instructor communications only. Students will no longer be able to communicate with each other through this tool. This change has been made in order to protect students’ personal information.

Students will continue to have access to their historical emails but will not have the ability to reply to or forward those messages.

Students will have access to a new Message tool in D2L that will enable students to connect with other students from within D2L. The Message tool has replaced the existing Pager tool.

Audio Note recording time has now been increased to 5 minutes.

“Chosen names” for students and faculty (also sometimes called “preferred names) will be available in Colleague and will cascade into the D2L Classlist.

Data updates between Colleague and D2L will occur in real time (meaning that if a student registers late, they will immediately have access to D2L and not have to wait until the next day).

The tutorial for how to use the Message tool is now available on the eLearning Tutorials at Camosun site.

There is often confusion in the world of D2L Quizzes: when to use Short Answer questions, and when to use Written Response questions.

In the example here, we have two possible answers listed, one with two words (Justin Trudeau), and one with just one word (Trudeau). Use a Short Answer question for this kind of question. 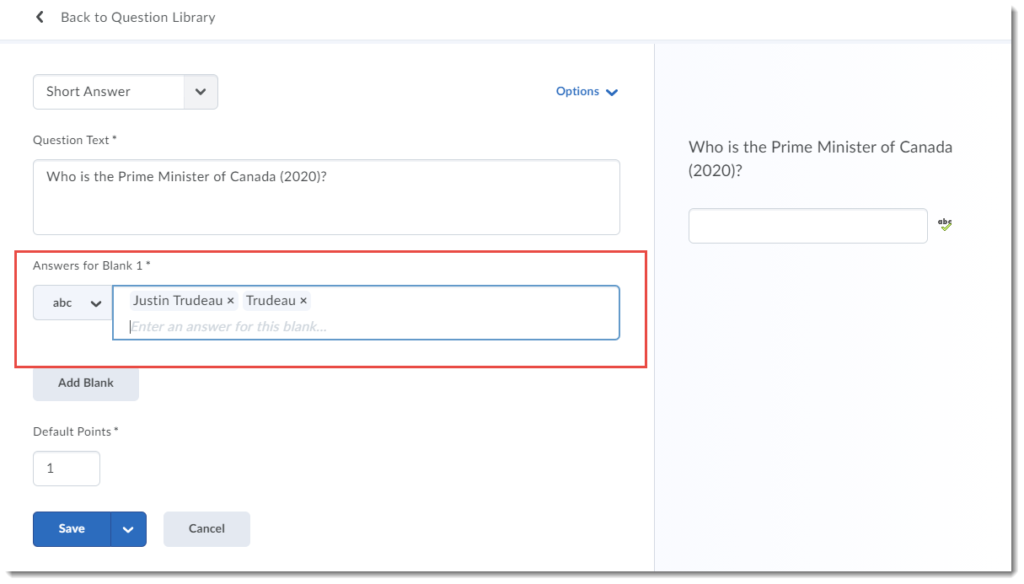 In the example here, we are asking a question that would require multiple words which could be presented in any order, making it impossible for the system to grade easily. Use a Written Response question for this kind of question. 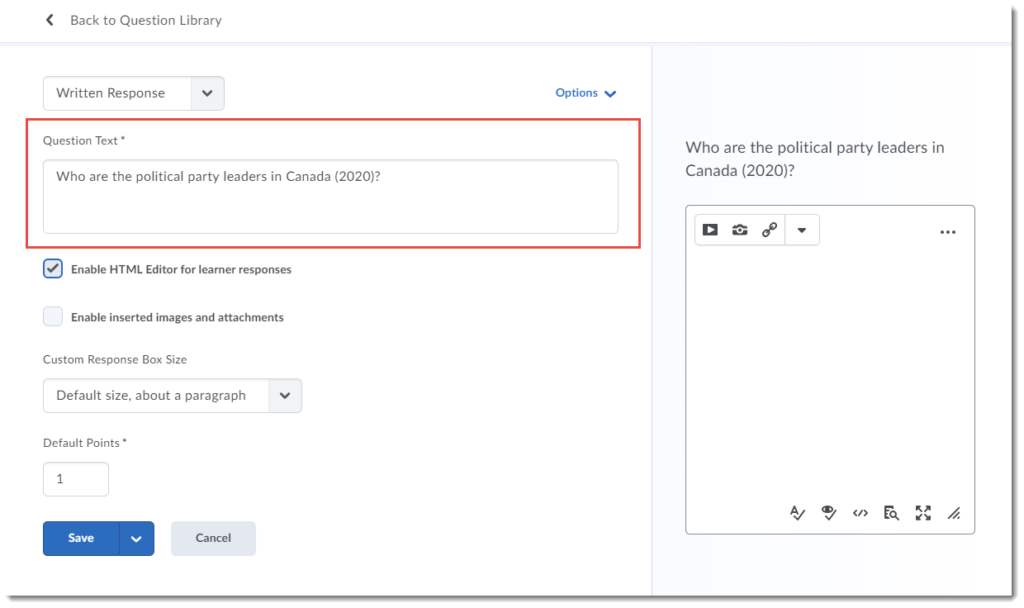 If you have questions or want to run a scenario past an instructional designer in eLearning, email elearning@camosun.ca to arrange for a consult.

As some of you may know, the newer Quiz Creation interface has at least one feature that has been driving me personally crazy:   If you create a Section in a Quiz, you can’t import questions from the Question Library directly into that Section. Right now you have to import questions into the root directory (the main page) of the quiz, and then move them into a section. How cumbersome.

In our next upgrade, happening at the end of this week, you will be able to import questions from the question library into a Quiz Section. Here’s how:

This month is “Update eLearning Tutorials and Add New Ones” month for our eLearning Tutorial site (and the On-Demand Training D2L site). We will be updating and adding new tutorials for the next several weeks, so check back on a regular basis.

For example, this week we have been working on a new structure for our D2L tools tutorial pages, and updating/creating new Assignment tutorials. Find out more at eLearning Assignment Tutorials.

And now, I wanted to showcase one of our new tutorials here, which will introduce you to a new Assignment Creation Experience which is available for opt-in in Camosun’s D2L right now. This interface will eventually replace the current interface, so I encourage you to try it out and let us know if you have any comments or problems that we can pass on to D2L.

This tutorial is for faculty who have previous experience using D2L and will cover the basic steps involved when you wish to create an assignment submission folder using the New Assignment Create/Edit Experience interface (opt-in as of August 2020).. For further information, please contact elearning@camosun.ca for assistance.

You can turn off and on the New Assignment Create/Edit Experience as needed, but be aware that eventually this new interface will become the default. New features will be added to this interface over the next few months.

Once you have turned on the new experience, any old assignments you have in your Assignments area will open it automatically when you go to edit them.

Unless otherwise indicated, all content on this site is licensed under a Creative Commons Attribution 4.0 International License.